Huntington Beach — Surf City — is always one of the toughest qualifiers on the AVP tour.

This year’s qualifier is even more challenging than usual.

The field includes not only the usual suspects, but also international beach stars, indoor national team players and even a 66-year-old rookie.

This is the first of eight AVP tour stops but one that has been mired in controversy the past couple of weeks. It will be without the sport’s biggest star, Kerri Walsh Jennings, and while many players considered not signing the AVP contract and skipping the event, all but a few top players will be there. For more, click here for the VolleyballMag.com story from last week.

Four international beach stars will make their debuts on the domestic American tour.

Chaim Schalk, a 2016 Olympian with Canadian Ben Saxton, will partner with five-time indoor Olympian Reid Priddy in Huntington, but may later partner with Brazilian three-time Olympic medalist Ricardo Santos when the latter receives his green card.

Canadian Olympian Sarah Pavan, whose volleyball resume includes two world tour medals last year as well as earning AVCA All-American honors four times at Nebraska, will play with Brazilian Maria Clara Salgado. Salgado, who took 2016 off to have a baby, is a veteran of the FIVB tour with sister Carolina. Pavan/Salgado should be considered not only a favorite to qualify, but a top contender.

Another Canadian, Brandie Wilkerson, will compete with Branagan Fuller. Wilkerson, who has eight medals on the NorCECA tour, met Branagan through another player, Trevor Crabb, “and am grateful for it,” said.  “She’s a natural athlete, super physical and extremely hard working, so I can’t wait to see how we do.”

Priddy is not the only indoor star at Huntington. Former men’s national team outside hitter Paul Lotman will play behind the block of Alejandro Parra. “Lotman has a crazy serve, they’ll be a tough team.”, acknowledges top qualifier seed Kevin McColloch.

Running down the top four qualifier seeds per gender:

No. 1 Janelle Allen and Briana Hinga: Hinga and Allen became the top qualifier seed Tuesday afternoon when Lisa Fitzgerald and Lynne Galli were forced to withdraw due to injury. A new team for 2017, Allen played with Megan Wallin-Brockway last year (fifth, four ninths, and a 13th), while Hinga played with Galli (13th, 17th twice, 21st twice).

“I’m really excited for Huntington because it’s essentially a home tournament for me, living in Long Beach and training in Huntington a lot,” Hinga said. “I recently paired up with Janelle in the past few weeks. In the last few weeks I’ve been really regimented, making sure I get enough playing time and getting a lot of touches, with some good rhythm. In the last two weeks we’ve practice together three times a week.

“I love playing with Janelle, I’m eager to see how it goes. Our chemistry is great, she’s such a kind person. I love being around her, she’s so positive, she’s always giving positive, helpful, constructive feedback, because she knows the game so well.”

Hinga sees the difficulty of the qualifier as an opportunity.

“This qualifier is so tough, that in some ways, seeding doesn’t really matter. There are top players from multiple countries sprinkled throughout. You never know what you’re going to get.

No. 2 Leah DeKok and Amanda Wiggins: Last year Wiggins competed primarily with Dana Fiume (two ninths, one 21st, one 25th), but the pair also finished ninth in New Orleans and 13th in Chicago.

“There are quite a few good teams ranked lower, so the qualifier looks pretty tough,” DeKok said. “Brutal is a good word. Our preparation is solid, we’re ready. We’ve trained three of the last four days. Practice and training is going well. We’re ready to compete.”

No. 3 Katie Jameson and Tracy Jones: Better known by their maiden names, the Lindquist sisters are diminutive (5-foot-6) but have exceptional skills. Last year the pair only competed in two events, Huntington (ninth) and Manhattan Beach (17th). They’ve played 116 events together, so their lack of recent competition is less of a concern than expected.

“We played in Huntington and Manhattan last year,” said Jones, “and I think we’re planning on doing that again this year. We’re getting old, have families, and play here and there. We’ve played once a week for the last year or two on Sunday mornings, I’m not sure you’d call it training. For us we have to make sure we’re in good enough shape and our shots are good enough to make it through a tournament. I think there’s a lot more younger players that come to the beach that have a lot of power. I think that now the younger players can not only hit with more power, but they can snap their wrists and hit the ball at different angles more often.

“My number one goal is to try and make it through the qualifier, even when we were at the top of our game I was worried about the qualifier. You never know who you’re going to meet, and single elimination is as cutthroat as you can get. It’s a little bit about luck in who you get. For me, it’s about getting into the main draw.”

“Things are going super well,” said Schuh, “it’s nice that we can practice almost every day with each other, and can be very open and honest with each other. Last year I switched from being a blocker to a defender, so it’s nice to be able to focus on just my blocking.

“We’ve been working with Sarah Day. She’s been helping out the last month and she’s super helpful. She’s helped me make a few adjustments on my block and my block has completely changed within the last month. I’m very thankful for that and her help. It’s been good.

“I’ve switched from the right to the left. I’m comfortable with that and it’s worked well. There are some good teams, that’s for sure. We’re prepared for anybody that comes our way.”

On the men’s side, the top four seeds in the qualifier are: No. 1 Kevin McColloch and Robert Rodriguez-Bertran, No. 2 Michael Brunsting and Chase Frishman, No. 3 Maddison and Riley McKibbin, and No. 4 Ed Ratledge and Eric Zaun.

No. 1 Kevin McColloch and Robert Rodriguez-Bertran: They played three events together in 2016, finishing with a fifth, ninth, and 17th.

Volleyball is a big part of their lives: “We both coach indoor for Viper in Temecula, and I own a beach club that we both coach at. I feel like my arm and my hand have been pretty good because of coaching, I’m always around volleyball.

“Rafu lives 10 minutes away from me and we have a court right in between us, so that helps a lot. We’re probably practicing less than he wants, that guy wants to go seven days a week, 24 hours a day, but I work too much for that.

“I’ve been in the gym and playing a lot. A lot more than the last two years. I definitely feel ready, Rafu looks super good to me too. We’re switching sides, he’s playing left, and I’m playing right, we look pretty good. We’re running some combos, we’re running some plays, we’re doing some pretty creative stuff.”

No. 2 Michael Brunsting and Chase Frishman: They finished their first season together with a seventh, ninth, two 13ths, two 17ths, and a 21st. Their goals are to finish in the top eight, and earn enough points to stay out of the qualifier.

“We’ve been working hard. We have put in the work over the course of the off season and now we’re letting the body heal up and getting the mind and body in the right place. We’re trusting our body of work,” Frischman said.

No. 3 Maddison and Riley McKibbin: The McKibbin brothers finished 2016 with three ninths, a 13th, 17th, and a 21st. 2017 marks the brothers’ third year on tour. Lefty Maddison has big ups and is a force at the net, while older brother Riley is a skilled setter and defender. Their signature win last year was an upset of No. 6 seed Casey Jennings and Bill Kolinske at Huntington Beach.

No. 4 Ed Ratledge and Eric Zaun: A new team for 2017, Ratledge is a 40-year-old, 6-8 lefty veteran of the tour, while Zaun is a 23-year-old youth who competed extensively on the NVL tour. Zaun moved to California in January to train.

“When I first came out here I started training with Ed and we beat some pretty good teams, and then did really well against some of the top AVP teams, and I told him, ‘I think it would be dumb not to play together,’ and he agreed,” Zaun said. “We started playing and training together in March. I think we have a pretty good shot. We’re pretty prepared for it.”

Finally, there’s Steven Cahn, nicknamed “Matsa,” who will make his AVP debut with a player less than half his age in Steve VanZwieten, a 32-year-old top Floridian.

“I cannot believe that it’s taken me this long to play an AVP qualifier,” said Cahn, a long-time fixture and player sponsor on the tour.

“I’m there for the players, I’m a player sponsor. I have my people. I put teams together. And I always have a dinner about 5:30-6 on qualifier day. I’ve always enjoyed that.”

Cahn’s window-covering business, Mr. Blind Man, has done blinds for many of the people involved in beach volleyball, including Misty May-Treanor, Eric Fonoimoana and Albert Hanneman, to name a few.

VanZwieten had actually planned to play with his brother Mark this season, but Mark was not available for this event.

“I’ve been friends with Matsa, as many of the players are, for a long time. He’s a legend out there. It should be a lot of fun. I’m really looking forward to this, because he’s one of those guys that’s at every event, and really supports the whole sport. It’s nice to play with someone that appreciates the sport that much,” VanZwieten said.

Given the disparity in age and skill level, what is the price of VanZwieten’s participation?

“The deal is a $100 appearance fee, a meal or two at Duke’s, and $10 a point that we score,” Cahn cracked. “If the other team wants to donate us points, figuring they can beat us in three games, that’s OK. I’m ready for that”.

“I’m hoping to pull a first round upset,” VanZwieten said. “If I can get through that first round I’ll be a happy guy. I think we can do it, we have some tricks up our sleeve. I’ve been working on my jump serving, covering the majority of the court and hitting on two. If those are on point I think we have a chance of pulling a first-round upset.”

Lee Feinswog - September 19, 2021
0
No team heads into this week's start of NCAA women's volleyball conference play feeling better about itself than Louisville. The fifth-ranked Cardinals improved to 10-0...

VolleyballMag.com @VBMagazine FINAL: Strong performance in S3 gives Butler their second set win vs T25 opponent in a week (#19 UCLA) but #16 @CreightonVB improves to 13-1 with a 3-1 win in Indy #GoJays #NCAAVB 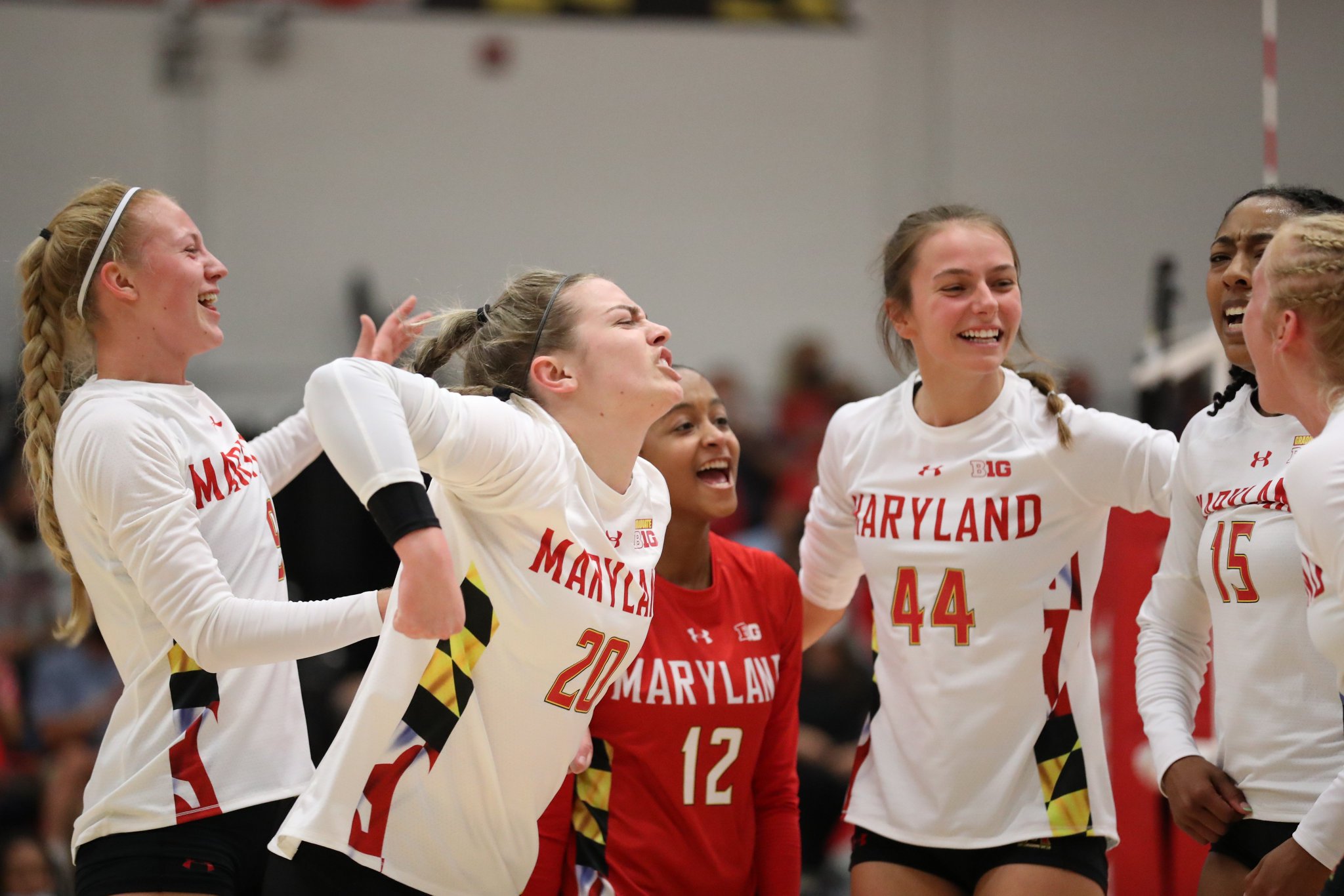