Hawai’i beat Long Beach State — in five, of course — and not only won the Big West Tournament title, but the automatic NCAA bid that goes with it.

Also Saturday night, Pepperdine won the MPSF, Lewis won the MIVA and Princeton won the EIVA. They joined Barton, which won the Conference Carolinas bid to the NCAA Division I-II men’s volleyball tournament this past Thursday.

And now they all wait until 1 p.m. Eastern Sunday when the bracket is announced on NCAA.com. Long Beach State will assuredly get one of the two at-large bids. Will the other go to UC Santa Barbara, UC Irvine, UCLA or USC?

Seven teams will be selected into the field, with the two top-ranked schools being placed in the national semifinals. The five other schools will first compete in an opening round structure.

More on that follows the recaps.

Only 11 points separate the cumulative scores between the two teams, as Hawai’i has scored 308 points to Long Beach’s 297 points in the three contests. Hawai’i is 27-2, while Long Beach stands 26-2.

Hawai’i’s Stijn van Tilburg hit .543 as he had 25 kills without an error, an ace, two digs and two blocks. Colton Cowell had a career-best 18 kills, hitting .471 with an ace, 12 digs and three blocks. Libero Gage Worsley came up with 11 digs, including two big pick-ups in the fifth set.

“I just appreciate how volleyball has brought this community together,” Hawai’i coach Charlie Wade said in the Spectrum Sports post-match interview. “This win is because of our fans.

“We’re in. We said all year long, the way it works, is that to get into the NCAA Tournament, there’s a match being played in the Stan Sheriff Center. We’ve got to be in it, and we’ve got to win it. Our guys came through.”

The Waves led from the pins, as David Wieczorek led all attackers with 18 kills while hitting .571 to go with two aces, two blocks and seven digs. Michael Wexter had 10 kills, an ace, four blocks and four digs, while Kaleb Denmark had eight kills, two assists, an ace and seven digs.

Jack Wyett led the Trojans with 13 digs, an ace, a block and five digs. Ryan Moss had nine kills, an ace, and eight digs.

“It feels good,” Pepperdine coach David Hunt said. “The way it ended was pretty special, that’s for sure. They’ve been playing well for the last month-and-a-half. Our guys are doing some really cool things, it’s fun to watch as a coach. It’s fun for me as a coach to sit back and watch those guys work hard every day and to perform well on the court.”

For Wieczorek, the win was validation of the teams’ work ethic.

“USC’s a great team, and they’re coached by a great coach, for us to come out and play as well as we did, and beat a team like that, it’s just a testament to our training.”

Collin Mahan led the Ramblers with nine kills, an assist, an ace and two digs.

“It was so fun to watch,” Lewis coach Dan Friend said. “The guys were incredible tonight and I was their biggest fan. We were great in all facets of the game whether it was offense, defense or serving and they really embodied what we’ve been working on all year. I’m elated for them, for our program, for all of our alumni and excited to get to that next step.”

Penn State’s Brett Wildman had 24 kills, hit .300, and had an assist, two aces, two blocks, one solo and six digs.

“The legacy (of the program) was based around the 1998 championship and to be able to add to that and continue that legacy is really special,” Princeton coach Sam Shweisky saud. “It feels a lot bigger than us and we’re happy to be here for this moment, but it’s really special to be a part of something this big. We’re honored.”

More from the NCAA:

The national semifinals and championship game — scheduled for May 2 and 4, respectively — will be hosted by Long Beach State University at Walter Pyramid in Long Beach, California. 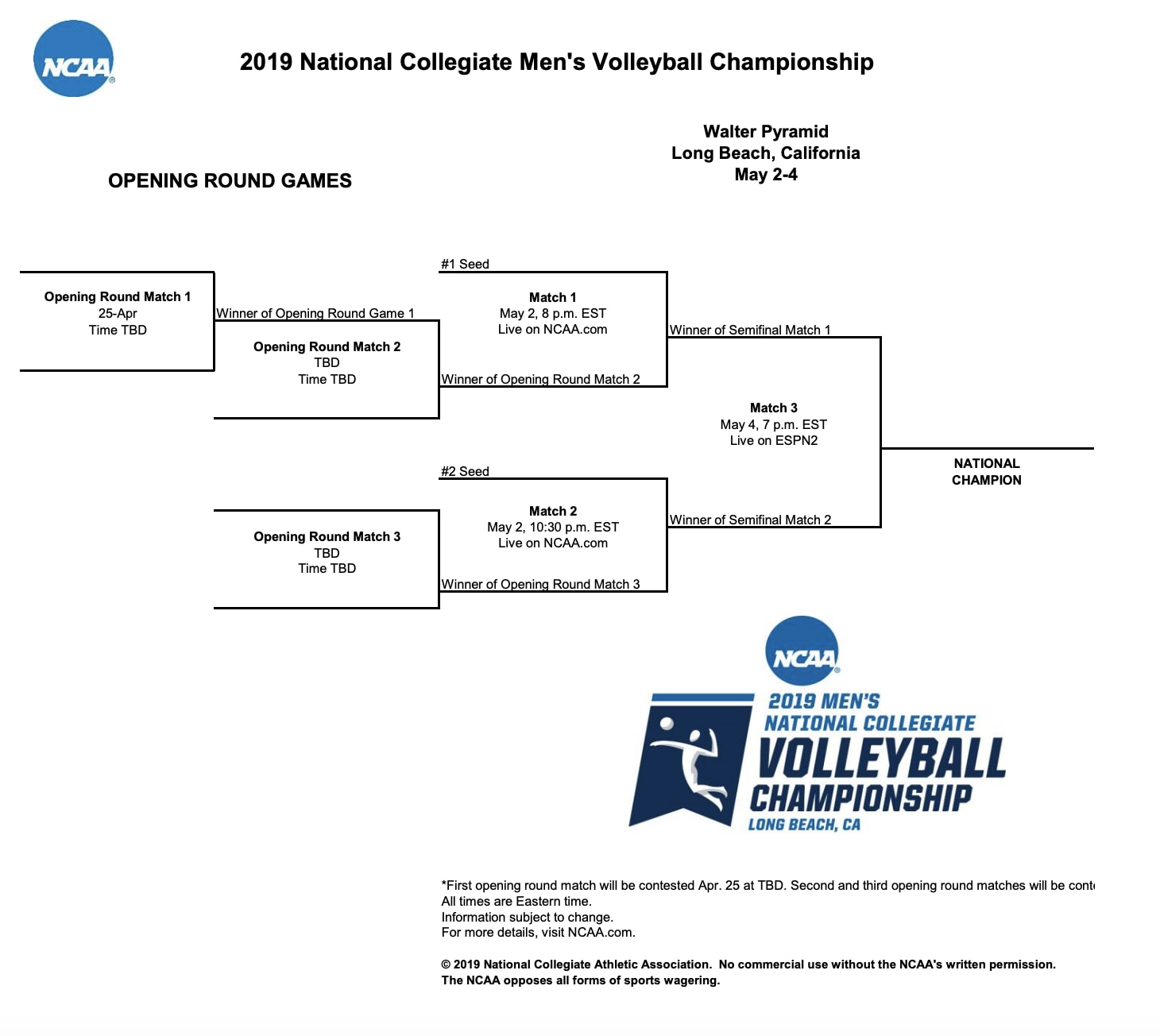