Another week in the time of athletics during coronavirus, so it was another week of clarification and more confusion for NCAA volleyball.

We’ll summarize what the NCAA said in a bit as we write for you from Baton Rouge, where next week we’re expecting to get hit by as many as two hurricanes simultaneously.

On Friday, Conference USA, while still going to play football, moved its volleyball and soccer seasons to the spring.

“I’m hoping the rest of the conferences will follow,” one ACC coach said.

Indeed, but for now the five conferences still planning on a fall sports schedule are the American Athletic, ACC, Big 12, SEC, and Sun Belt. We’ll break down those leagues in a bit, too.

But by all accounts, those five leagues are planning to play volleyball in the fall — and perhaps the spring, too, without penalty — as the NCAA said it will do its best to have fall championships in the spring.

As one coach told me, “We can play both, in the fall and the spring,” and so far no one has said they can’t.

Or, as one Sun Belt coach cracked, “We are one of the five people who don’t leave after the bartender said ‘Last call!’”

I’ll drink to that.

In the case of volleyball, we normally have a 64-team NCAA Tournament. The number floating around is 16, as in 16 teams make the field from a nation that has 27 other conferences that have moved volleyball to the spring.

This is all hypothetical — and so are the teams inserted, so let it be — but let’s assume the ACC (Pittsburgh, Louisville), Big 12 (Texas, Baylor), and SEC (Kentucky, Florida), which are planning to play in the fall, are also eligible to play in the spring. Throw in the Big Ten (Wisconsin, Penn State, Minnesota, Nebraska) and Pac-12 (Stanford, Utah) and, assuming all those teams in parentheses would likely fill the bracket, that would be 12 teams. Add BYU and Creighton and you’ve got two at-large spots.

Or maybe Nightmare on West Washington Street, which is where the NCAA is located in Indianapolis

Either way, a terrible slap in the face of our sport.

“We want to provide opportunities for student-athletes whenever possible,” said acting board chair Denise Trauth, president of Texas State, in the NCAA news release.

“We understand it will be complicated and different, and we’re not certain how it will look. But we believe it’s important to try to give students that championship experience.”

Tell that to the 48 teams that get left out if there is a 16-team bracket.

Anyway, the coaches are facing another nightmare of their own, this one with recruiting and scholarships. Because the NCAA also declared:

Good for the kids, especially the ones who opt out this fall or even the spring. Tough on coaches, who won’t have scholarships for everyone.

But one step at a time.

Here are the five conferences, which include 60 programs, listed in the order of suggested start dates with whatever info we could glean:

Big 12, September 1
The conference, which has nine volleyball teams, last posted on August 12 when it said, “All Big 12 sports’ competitions will commence after September 1. To ensure consistent health and safety protocols, Volleyball and Soccer matches will be limited to conference opponents only.”

Last year, Baylor won the Big 12 and made to the NCAA national semifinals. The Bears are certainly one of the nation’s elite teams. The league also includes perennial favorite Texas, which appears to have its best team since winning it all in 2012. Also in the conference are Iowa State, Kansas, Kansas State, Oklahoma, Texas Tech, West Virginia, and TCU.

Conference commissioner Bob Bowlsby said in an interview last week, “if there’s no college football this fall in the Big 12, there will be no other sports played at Big 12 schools in the 2020-21 school year.”

All 12 teams will play in the SBC Tournament. This is a league that is spread out pretty far. Appalachian State, for example, goes from its home in the mountains of Boone, North Carolina, to Georgia Southern for three matches September 25. The next weekend it goes to Coastal Carolina in South Carolina for two matches, before returning home the next weekend for three matches with South Alabama. And so on. It’s similar to the others who have a 2020 schedule to show.

The SBC has no schedule listed on its website nor any news since it announced on July 23 it was moving all its sports to at least September 3.

SEC, September 25
The SEC has 13 teams and they’re full speed ahead with volleyball. One insider said, however, don’t be surprised if the season doesn’t start until mid-October. LSU, for example, has a schedule up on its website (that’s important, because it’s where I live and I get to watch matches). So does Texas A&M and Missouri. But Kentucky and Florida, who tied for the league title in 2019, on the other hand, have nothing. Also in the SEC are Georgia, South Carolina, Tennessee, Ole Miss, Arkansas, Alabama, Mississippi State, and Auburn.

One thing that may factor in scheduling is that the SEC, like the ACC, has its own ESPN-based network.

American Athletic Conference, October 1
The AAC is a two-division, 11-team league that had great races in both divisions last year, ultimately won by SMU in the West and Cincinnati in the East. The West also includes Tulane, Houston, Tulsa, Memphis, and Wichita State, while the East has UCF, East Carolina, Temple, and USF. UConn left to rejoin the Big East.

The NCAA shows teams playing back-to-back in one place on Thursday and Friday through November 13.

There’s also this from the AAC about volleyball: “Three weekends will be available for nonconference opportunities, on or after Sept. 1. The 2020 American Women’s Volleyball Championship will be held Nov. 21-22 at Fifth Third Arena on the campus of the University of Cincinnati. The top two teams from each division, based on regular-season standings, will qualify for the championship.”

ACC, October 3
This 15-team league was won last year by Pittsburgh, which went 18-0 in conference play. Georgia Tech was second and Louisville, which tied for third with Florida State, Notre Dame, and North Carolina, shocked the field with a stunning NCAA upset at Texas to advance to NCAA round of eight. The ACC also has two new head coaches in Luke Slabe at NC State and Marci Byers at Virginia Tech, who never could have expected this when they took their jobs.

The league website has nothing up in terms of a volleyball schedule and/or news. But the coaches, who meet by Zoom on Monday, have been given 10-match schedules. If you recall from our story earlier this month, the ACC has broken up into pods of five teams each and will only be allowed to play within those pods:

We must note, too, that North Carolina, NC State, and Notre Dame have already gone to online classes because of COVID breakouts. 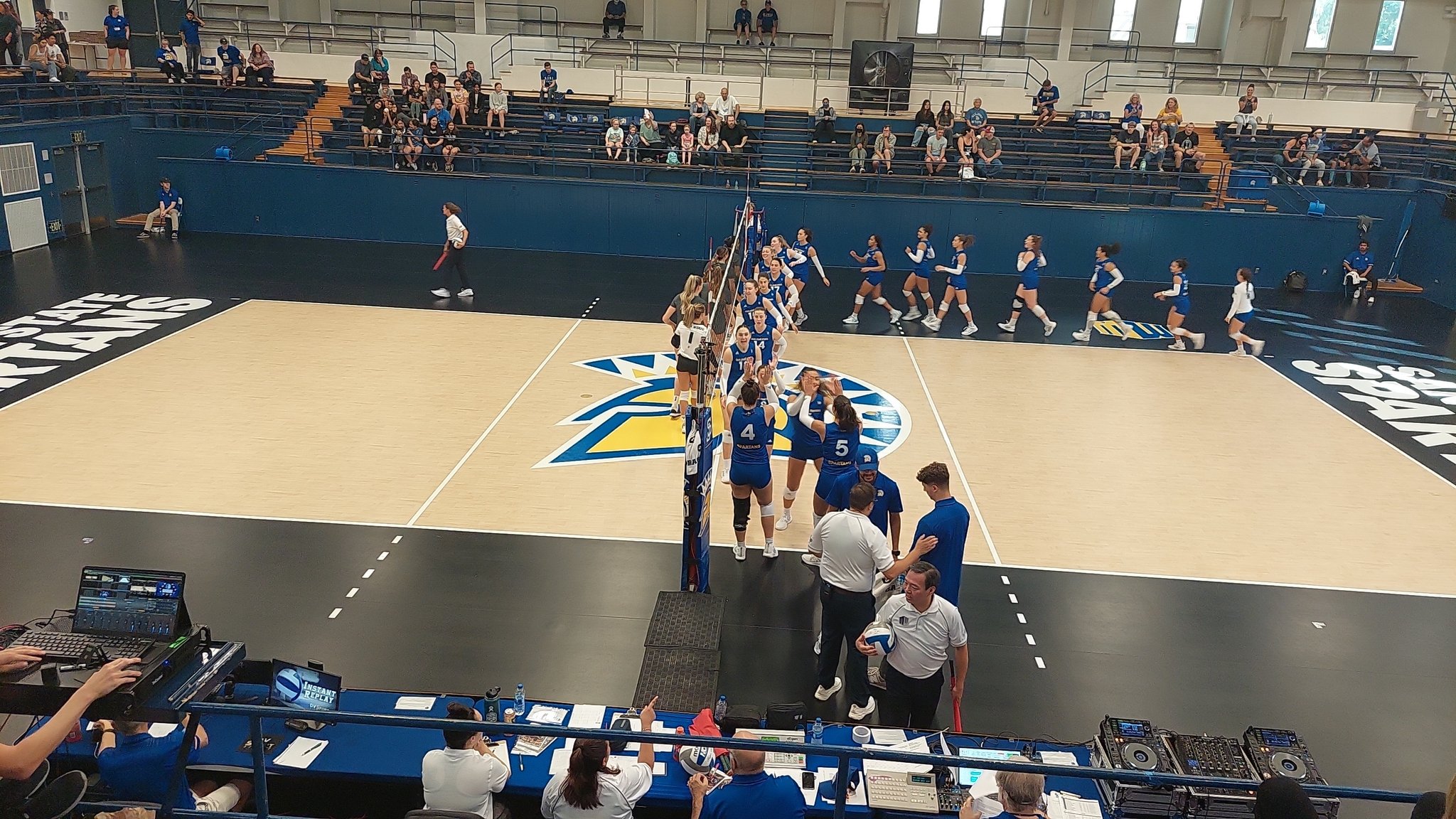