In a normal world — and damn, I’m so sick of saying that — this would be packing day. Preparing to travel to what is basically our Super Bowl. We cover it all, but in volleyball, nothing is bigger for us at VolleyballMag.com than what would have been this week.

The NCAA Division I Women’s Volleyball Championship in Omaha. National semifinals. The title match. The AVCA convention. Camaraderie, schmoozing, mingling, and a hell of a lot of volleyball sportswriting.

Alas, but this is the NCAA Tournament that wasn’t.

And so we all sit at home. Many of the coaches will still participate in a virtual AVCA convention, trying to learn all they can by Zoom. They won’t be gathering en masse at the hotel bar every night.

The four teams that would have been in Omaha? We can only imagine. But we won’t be interviewing those coaches and players at news conferences on Wednesday, nor will we watch them practice.

One by one they fell.

As best as I can recall and from going through the VolleyballMag.com archives, the first story we had was March 28 about Washington. Remember when we basically first heard about the coronavirus hitting hard in America? You’ve seen that news clip so many times where they’re wheeling patients out of a nursing home in Kirkland, Washington. That’s not far from where Washington coach Keegan Cook lives.

We did features on USC and new coach Brad Keller, and Alabama and all its transfers. We wrote about Florida star Thayer Hall, and the amazing story of Syracuse’s Naomi Franco.

There was the article about LSU coach Fran Flory helping make PPEs and a great chance to catch up with the delightful Wisconsin All-American Dana Rettke, who offered such a wonderful perspective:

“Absolutely, and not just for me. I think this is something that the whole world kind of needed to do just for the sanity of everybody and everything else,” Rettke said. “Everyone is so busy all the time, doing this and doing that, and I think this has given people a chance to stop and smell the roses.

“No one likes to just sit at home and have everything closed. It’s obviously horrible for the economy and awful for everyone who’s had the virus, but there’s so much benefit from taking a little break.”

It was obvious that things were getting dicey when we wrote about teams in the Cal State system, which was announcing its nearly 500,000 students would not attend fall classes on campus (cue the foreboding music to this week when the Big West canceled the spring season).

We knew COVID would wreak havoc on officials, and referee Ed Tucholski collaborated with us on a story about the challenges they would face.

It was July 29, evidently, when our reality began to kick in. My story had the headline “As numbers spike, chances for a fall NCAA volleyball season keep sinking”

From that story:
There are 32 NCAA Division I conferences. Nine — America East, Atlantic 10, Big West, Ivy League, MEAC, Metro Atlantic, Northeast, Patriot, and SWAC — have already said they will not have fall sports in 2020.
That’s more than one-fourth of the conferences in the country.
Two of the Power 5, the Big Ten and the Pac-12, have declared their leagues will play only conference matches. We’re waiting on the inevitable follow-along from the Big 12, the ACC, and the SEC. The ACC has a plan and it’s tenuous at best for volleyball, calling for a September 10 start and noting that volleyball would play a minimum of 10 matches.

Then the Pac-12 announced it would start its season on September 26 (although that conference ultimately delayed to the spring).

A few days later, the ACC announced its cockamamie 10-match plan of having three pods of five teams each with geography, not competition, the determining factor.

A week later the Big Ten and Pac-12 postponed to the spring. I’m pretty sure that was when we canceled our flights for this week to Omaha.

They all started to fall like dominoes. Two days later the count was up to 215 teams that had postponed to the spring.

Put a fork in the fall.

I wrote what I thought was a pretty fun breakdown of the situation with a chance to plug the idea that my hometown university, Stony Brook, and my alma mater, Southern Illinois at Carbondale, would play for the national title.

When the dust cleared, there were five of the 32 conferences left standing in the fall, the Big 12, ACC, SEC, Sun Belt, and American Athletic, but it wasn’t long until the AAC punted to the spring. That was on August 25 and, well, by then all of our heads were sprinning.

But we knew we would not be in Omaha this week.

So we were left with the ACC and its silly schedule, the SEC, which hadn’t figured it out at that point, and two leagues planning to play full fall slates, the Big 12 and Sun Belt. A few others played some non-conference matches, like teams from the Southland and Southern. But that was it.

In retrospect, those teams that played got way more coverage from us than normal — some can say than they deserved — but they were the only show in town.

I went to five venues.

The first match of the season was, incredibly, Houston Baptist at Louisiana, on September 4. They played Friday night and again on Saturday. It was fun to see the Ragin’ Cajuns and get to know the Houston Baptist folks, but, well, it wasn’t like going to one of the early tournaments I usually hit in September, like a Pac-12/Big Ten Challenge.

A few weeks later the Big 12 season was getting under way, so I went to Norman to watch Texas at Oklahoma.

LSU (I live in Baton Rouge) played at home against Mississippi State. In the convoluted eight-match SEC schedule, the Tigers were to be home again just one other time, against Ole Miss. That two-match series was postponed and the rematch was again coronavirused out.

Then I went to Baylor at Texas in early November, and then made it to Foley, Alabama, on November 21 for the Sun Belt Conference tournament semifinals. That was the same week we had a story with this headline: COVID wreaks havoc on college volleyball as Sun Belt tourney begins

And that was that. For the fall, we wrote more features, did NCAA roundups, and reported way too often about matches being postponed or canceled.

Some quick thoughts about the fall season:

Georgia Tech was the big surprise of the ACC, Texas (and Logan Eggleston in particular) is really good, so is Baylor, the SEC (well, maybe Kentucky) did very little to impress, and Texas State and Coastal Carolina were probably better Sun Belt teams than most realize.

And now we face the stark reality of not only missing out on this week, but what lies ahead.

Already the Ivy League and Big West have canceled their spring seasons. So the 48-team NCAA Tournament now has 30 conferences that get automatic bids, which leaves 18 at-large. Some time in April some Power 5 bubble team that gets in should send a thank you to the Ivy and Big West.

The NCAA Tournament is scheduled for April with the NCAA semifinals and championship match back in Omaha April 22-24.

With fans? Without fans? If you go to NCAA.com you can fill out a form to get information “about future ticket opportunities and event information.”

About an hour after Stanford beat Minnesota in last year’s national semifinals in Pittsburgh, in the back of the arena near the loading dock, the two teams went to wait for their respective buses.

It is, but as he knows, there’s so much more. This year, there won’t be any embraces or even mask-wearing fist bumps.

So here’s to the week that wasn’t. My suitcase remains in the closet as I yearn, like all of us, for a normal (here we go again) volleyball world.

Our friend Pete Wung, a self-proclaimed “volleyball dork,” wrote about what it’s like for coaches like him to miss out on this week. It’s well worth a read.

VolleyballMag.com @VBMagazine So many former @NCAAVolleyball greats are playing pro. Here is our weekly report on what's happening internationally: https://t.co/ohStGPARQ2 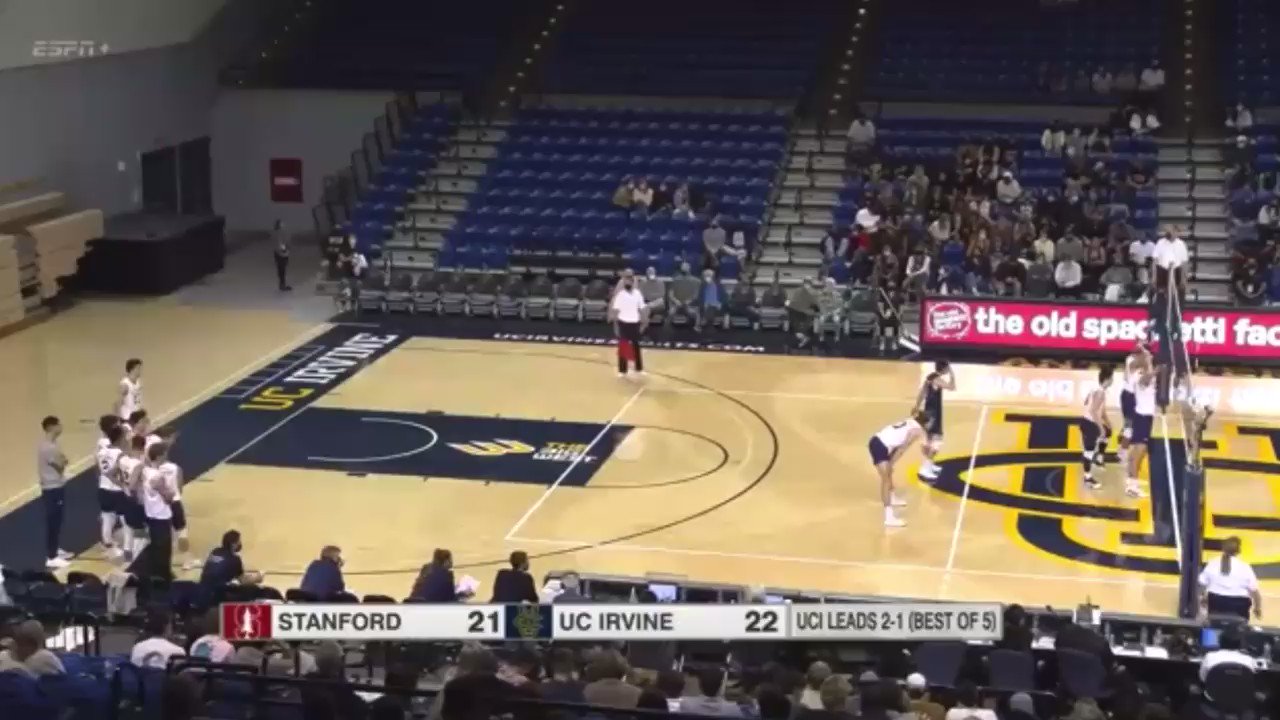