During the early weeks of the COVID-19 pandemic, when activities like volleyball practice that were once taken for granted began to shut down, a group of PAC-12 coaches was conducting weekly virtual meetings.

During one meeting, the coaches — prompted, said Oregon coach Matt Ulmer, by discussions on race in the wake of George Floyd’s death — addressed diversity.

They talked specifically about the lack of people of color and other minorities in their ranks.

“We thought that was a problem,” Ulmer said.

So they did something about it, and now minority coaches are benefitting from the mentorship of people like Ulmer and his PAC-12 counterparts.

The same is true with assistant coaches. In 2012, 76 percent were white. Last season, the number was 73 percent.

Across all NCAA divisions last season, 82 percent of women’s head coaches and 78 percent of assistant coaches were white men or women. Again, those numbers have remained fairly steady through the past decade.

“What can you do in your circle to make a good change?” Ulmer asked rhetorically, referring to discussions he was having with other PAC-12 coaches. “There’s so much that we feel like is out of our control, but we thought this was something that maybe we can do.”

Stanford coach Kevin Hambly said: “Our sport is still predominantly white, although I think it is going in a good direction. But the coaching has been stagnant, and how do we make a change?”

At the University of Arizona, associate head coach Rita Stubbs, who is Black, was having similar thoughts and had been talking with Hambly about the issue. What could be done?

The AVCA had been trying to stoke the embers, creating a number of initiatives to encourage minority participation in and awareness of volleyball. In 2021, the AVCA began a weekly recognition of Blacks for “their pioneering and influential efforts in the sport of volleyball,” according to its website.

A Diversity Development Team history commission also was formed. Its next step, begun this year, is to “focus on the robust and impactful contributions of Black and brown people and others throughout (volleyball’s) evolution,” according to the website.

Hambly said there were conversations among PAC-12 coaches to lend some financial support to what the AVCA was doing, but they decided they wanted to do something a little more hands-on.

With Stubbs, Hambly and Ulmer leading the way, the PAC-12 initiated a coaching mentorship program for minorities. Hambly set up a non-profit to lend support.

“We were looking around at the number of coaches that were being hired in the PAC-12, overwhelmingly white,” Hambly said. “Not a lot of minorities, and we started talking about why that is the case.

Stubbs, who has been on search committees to hire coaches, noted that few minorities even were applying for jobs, let alone being hired.

“Kevin and I had been talking for a while about it, just how to make a better connection,” Stubbs said. “The PAC-12 jumped on board immediately.”

The goal, Stubbs said, was to help minorities and that includes men, too, who were in the coaching ranks develop a better network, a network that gave them a connection with some of the best, most experienced coaches in the country.

“We don’t discriminate in who can apply because that would defeat the purpose of all this,” Stubbs said.

In 2021’s inaugural program, there were six “mentees” selected from a pool of applicants and assigned to PAC-12 mentors.

This year, and moving forward, there will be four mentees per year, meaning, with 12 schools in the conference, a PAC-12 coach would mentor every three years.

Asque is one of the program’s early success stories. She was a standout player at Virginia and was an assistant coach at Seton Hall when she connected with Hambly through the mentoring program.

In January, Asque got her first head-coaching job, taking over at Siena.

“I would say from my experience, when I started from playing and going into coaching, I always felt like there was this invisible barrier when it came to just being able to ask and talk with certain individuals or certain coaches,” Asque said, “being able to be exposed and welcomed in willingly when it came to asking certain questions or being able to express, ‘Hey, I have this knowledge.’

“You can get lost sometimes if you don’t have the ability to trust your instincts and really have the right people to bounce ideas from. So overall it was really fantastic to get that validation of where I was going with my philosophies and my knowledge base.”

So what does the mentor/mentee relationship entail?

There are plenty of phone calls and Zoom meetings. Those occur on a weekly basis. There also is an effort made to get the mentees on the PAC-12 campus at least once. Asque actually met with Hambly during the 2021 NCAA Tournament in Minnesota because of the difference in California’s COVID restrictions at the time.

But the program goes deeper than simply connecting coaches. The mentors provide aspiring minority head coaches with tools they need to land — and, hopefully, keep — a job.

Stubbs said mentors cover topics such as: Can I coach at a Power 5 if I want to have a family or I am young?; how to negotiate a contract; how to prepare for an interview; once you get a job, how do you keep it?

Stubbs said mentees also are encouraged to learn all of the peripheral components of their sport: the weight room, the training room, marketing, academics, etc.

“I tell people you have to show your worth,” Stubbs said. “How do you keep yourself valuable in more than just your little bubble of coaching?”

The mentees also get instruction from True North Sports’ Coach Development Academy. Asque said through True North, she learned nuances such as how to approach the job professionally, how to talk with support staff, how to communicate her message to assistant coaches and how to interview appropriately.

“It’s a lot of those important insights that aren’t always talked about,” Asque said.

To further flesh out what athletics departments might look for when hiring coaches, senior women’s administrators are brought in to lend their expertise.

Stubbs said another key is patience. Landing that dream coaching job, she said, will take time.

It’s who you know

That brings the discussion back to connections. Sometimes who you know is as important as what you know.

Having a PAC-12 coach on speed dial can’t hurt.

“Maybe you feel like you just can’t get that job,” Oregon’s Ulmer said, “can’t get that interview or you can’t get to that next level, and you’re trying and you need to know somebody who can help you get there. I feel like we’ve run into that a lot. We’ve had a handful of head coaches who just feel like they don’t necessarily get looked at for certain jobs.”

Stubbs said: “Sometimes, your voice just isn’t heard because you’re not saying it to the right person. You can be dead on with the information that you have, but now that you have a coach who has won a national championship calling on your behalf, that goes a long way when you have the names that everyone knows.”

Because of the number of non-whites growing in the playing ranks, the hope is there would be a natural progression of more minorities becoming coaches once their playing days are done.

Stanford’s Hambly is optimistic that will happen, but he said that hope comes with a caveat.

“(Coaching) is not something you go into lightly,” he said. “One of the things you have to be cautious about at times is people don’t know what to do with their careers, so they get into coaching.

“But for the ones who want to be coaches, we hope this is a nice vehicle for them to get into it or to have their eyes opened up to other things in athletics, seeing an administrator and what that job entails and do they find value in that as well.”

Hambly said his relationship with Seton Hall’s Asque didn’t stop when her time as a mentee ended. He said he now considers her a friend.

Asque said that being able to develop personal relationships with other coaches was one of the best parts of her experience. And now she will get to return the favor. As a head coach, she can pass on what she learned from Hambly and others to aspiring minority coaching candidates.

Perhaps a young minority coach would be intimidated to approach Hambly, but he or she might approach Asque, who could reach out to her new friend in Palo Alto.

“I feel great that I have that place where they feel like they can come to me for questions,” she said. “I help them as much as I can. Of course, I am still growing in my own career. What I do know is I want to share.

“It’s not so much about knowing all the right answers. It’s more so having the experience of what’s worked, what hasn’t worked, what has built up the most tools to be successful.”

No other volleyball programs have approached the PAC-12 about its blueprint for the minority mentoring program, Hambly said, though he said a couple of other conferences inquired about it with regard to other sports.

His hope is that the mentoring initiative will catch on with other volleyball programs and conferences, and that the non-profit he established can be used to help get the ball rolling.

In the meantime, the PAC-12 will continue its efforts to grow the minority coaching pool little by little. As more Simone Asques join the head-coaching ranks, other minorities could be inspired to do the same.

“ …  We want our sport to continue to grow, and the only way we’re going to do that is by putting diverse people in front of everyone.

“You don’t go forward if you don’t bring someone with you.” 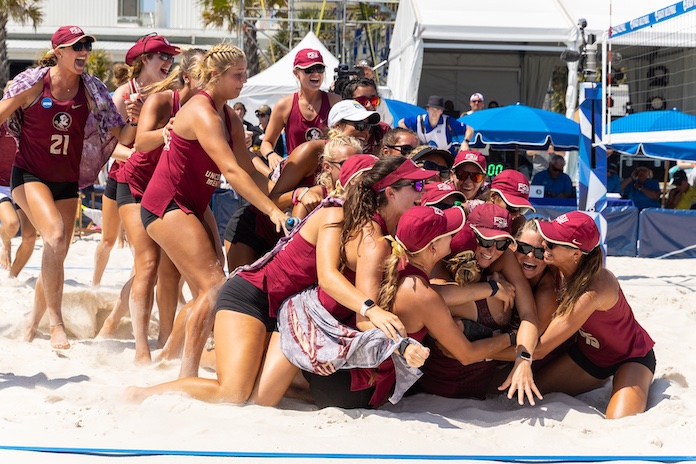