Stanford beach volleyball is, in one aspect at least, no different than any other athletic team in that every member has their role. Like, say, the player whose job it is to remind everyone of their inevitable mortality, and that all things should be taken in perspective.

Or the one who brings in studies on the positive impact of placebo effects.

Or the researcher who is studying the physiological effects of forgiveness.

Or the yoga instructor. Or the Olympic assistant coach.

Or the sports psychologist, who “does sessions with the team that are very different,” coach Andrew Fuller said on SANDCAST: Beach Volleyball with Tri Bourne and Travis Mewhirter. “We’re inserting different voices and perspectives and voices into their world, because you never know what’s going to stick… People at the national level don’t have this type of support.”

Welcome to Stanford, the most academically rigorous and, almost paradoxically so, one of the most athletically competitive universities in the country, with the resources and exceptional minds to prove it.

“One of the things that really excites me about being at Stanford is not only the abundance of resources but the level of access to the resources and I would be remiss if I was not taking advantage of people who aren’t just easily accessible but are super stoked on what’s happening in athletics and want to help out,” Fuller said. “I think there’s a particular irreverence to Stanford that I enjoy.”

That unique level of expectations, that irreverence, is as much an advantage as it is a challenge. Some schools, like LSU, for example, are limited geographically. Stanford’s excellence, and its demands to continue to be excellent, are, ironically, its biggest hurdle.

“It’s very self-selecting, and we can have some conversations that are very brief,” Fuller said. “We can have a conversation with a young student-athlete who, athletically, is wonderful, and is perhaps a very good cultural fit for us. And then we see the transcript and the conversation just stops. Stanford’s a choice, and some students don’t want to do the work that is required to get there. It’s my belief that for some students, Stanford is worth the work. And is it going to be easy? Not at all. It’s going to be difficult. And people who are up to that challenge and go through it thrive at Stanford.”

Indeed. One in particular, a name volleyball fans are likely to become familiar with in the years to come, is Kathryn Plummer, Stanford’s 6-foot-6 sophomore who already owns a lengthy list of accolades – Pac-12 Freshman of the Year on the beach, the ESPN W Player of the Year indoors among them.

“She’s doing things from a technical standpoint we haven’t really seen in players her size, ever,” Fuller said. “If any listeners get to watch her, KP is hand setting every ball that she can. If she can get her hands on it, she will. I’m trying to remember the last player her size who has ever hand set. I would love it if someone could name someone who’s 6-foot-6 who’s saucing. She’s kind of breaking the history of someone what it means to be a tall player… The approach she’s taking and the chance she’s taking and the risk – those are the things I’m stoked about, the way she’s approaching the future of her game.”

Plummer is exceptional, yes. But her mind, her approach, is also befitting the Stanford culture – the top one percent of the one percent.

“I’ve learned that if I don’t have a damn good reason for doing something, they’re going to find the holes in it and just blow me up,” Fuller said, laughing. “That’s the greatest gift. Whether that’s some game or drill that I come up with, they’ll immediately pounce on the loophole of it and sometimes I’m like ‘You guys are right.’ They just crush me all the time. What’s that old adage? Surround yourself with people who are better than you? At any point, I am the dumbest person in the room.”

The dumbest person in the room? The one with a bachelor’s degree from Virginia Tech and an MFA from the Academy of Art in San Francisco, who also happened to have a fair volleyball career of his own?

Sounds a little crazy. Then again, that sounds a bit like Stanford.

Choose the ball the pros use. Choose Wilson.

Travis Mewhirter - August 1, 2021
3
In a match that featured three Olympic rookies, it was experience, and the only player with it, that prevailed. Kelly Claes and Sarah Sponcil entered... 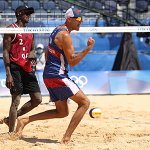