When we first aired this podcast in 2017, just the fifth in SANDCAST’s early history, we named it “A glimpse into greatness with April Ross.”

Now, with nearly four years in the rearview, what we should have named it was: April Ross, Beach Volleyball’s Alchemist.

I was in Sofia, Bulgaria — where else would I be this summer? — when Ross and Alix Klineman won the gold medal at the Tokyo Olympic Games. Their match aired at 5:30 in the morning, providing me plenty of time to figure out how to craft a story befitting such a remarkable accomplishment: Ross, at the age of 39, completing her full medal set; Klineman, the rookie who switched to beach because she thought that was her path to the Olympics, thriving on the sport’s biggest stage.

I knew that it was during that podcast that Ross announced her partnership with Klineman, who had just one year of experience and not a single international point to her name. But I couldn’t remember where in the podcast Ross broke the news, so I just listened to the entire thing, which is still the longest podcast we’ve ever done. The more I listened, the more captivated I became. I found myself hanging on every word, because every single word Ross said on that podcast came true.

She was open, vulnerable. She revealed the burnout she was feeling heading into Rio de Janeiro, the dark cloud that hung over her head until she was down 9-12 in the second set of the bronze medal-match against Larissa and Talita. Even though I was one of three people in the kitchen that evening, sharing two bottles of wine with Ross and Tri Bourne, the openness with which she spoke was still startling, endearing, preciously valuable. Honestly, I just wanted to give her a hug.

“I don’t think I’ve ever been more relieved than I was after we won the bronze medal,” Ross said. “We were so bummed and negative and just trying to get ourselves to turn it around. We had 24 hours between matches.

But what nobody knew at the time was how the next chapter of Ross’ life would play out. She barely knew. All throughout 2017, she had debated her next step: “I kinda had to have some discussions with myself going forward: Am I just trying to be good? Do I want to go internationally and continue my career and do the best that I can? Or am I in this because I want to go to Tokyo and get that gold that’s eluded me for two quads now? What am I in this for? My career? Or is this still a dream?” Ross said.

“I decided that this is my dream, and I haven’t got it yet. I’m going to be all in so that that standard is still there for me. I know what I need to do. I know what it takes at that level. It gives me renewed energy. I feel like it’s going to be a struggle.”

And it was a struggle, just as Ross said it would be. After being pegged as a gold medal favorite just one summer prior, it was a struggle to begin the next quad in country quotas and qualifiers. It was a struggle not to break pool in Fort Lauderdale, just one event after winning gold in The Hague. But it was this struggle Ross accepted when she picked up Klineman, a struggle she knew could one day end with a gold medal draped around her neck, the only material accomplishment missing from her lavishly decorated career.

“There’s going to be hiccups and challenges and it’s going to be starting at square one for me, but at the same time, what is the meaning of what you’re doing if you’re not challenged?” Ross said. “If you don’t have these things that are going to help you grow and help you overcome, what’s the point? It’s not supposed to be easy. That was the choice: It was the safe choice or the choice I thought was challenging but had the most potential. I think I’ve learned a lot over the years, and one of the things I’ve learned the importance of is building a like-minded team around yourself, having the same mentality and the same goals and the same work ethic are all really important I think.

“It’s hard to allow yourself a period of failing to experience those growths. Change is always going to cause you some uncertainty. You’re going to go through some growing pains and if you’re not ok with that I don’t think you can necessarily get too much better. You have to trust that you can take the information and make yourself better.”

So Ross trusted. She trusted in her team: A rookie partner in Klineman and a rookie coach in Jen Kessy. The chemistry they had is something you simply cannot replicate. Ross and Kessy shared one of the most special moments of either of their careers, standing on an Olympic podium for the first time, accepting a silver medal after an all-American final in London. Klineman and Kessy shared a common tenaciousness, a love for winning but also a similar loathing for losing, a combination that produces a ravenous addiction to learning, growing, ensuring that losing just won’t happen ever again.

“You’re always looking to get a little bit better, get a little bit more disciplined, and you don’t realize how gnarly you’re getting because it’s a daily effort and it starts to build up,” Ross said. “It’s a huge balancing act and that’s one thing I’ve learned throughout my career is that I can get really gnarly and really intense, which is why I think I’ve had so much success, but I think there is a way to train smart and enjoy the journey a little bit more and still maximize what you’re doing. I’m still searching for that fine line and my day today was just back to back to back: train, lift, treatment, just so intense.”

It helped that all three of them were in that same search, constantly. In Klineman, Ross saw something a 6-foot-5 version of herself: “She just has the really disciplined mentality. The way she trains is very focused and intense. I think her mentality in practice and wanting to get better and how she’s going to go about that and always coming with that competitive mentality was a big intangible for me. I feel like in my career, I’ve gotten some victories purely out of my determination to win. You get to this point and it stops being about doing things right or making the perfect shot and more about your determination to win and refusal to lose and I see a lot of that in her.”

Here is a good place to remind you: This was almost four years ago. In the fall of 2017, with the Olympic quad starting up, virtually every available blocker on the AVP was calling Ross, asking what her plans were, something she was oddly surprised and flattered by. As good as Ross knows she is, as much as she knows she’s won, she’s still on that constant search for greatness.

“I feel ridiculous that I have this choice or whatever,” she said of her partner selection. “I started operating under the understanding that, number one, I have to prove myself. I always have to prove myself. As this Hague signup deadline got closer, a couple people approached me and said ‘If you want to play, let me know.’ I was flattered and shocked that people were so interested in playing with me. Honestly, I don’t take it lightly, and if anyone wants to play with me, I think it’s amazing. It was really hard to figure out what to do, and there weren’t many chances to compete and try people out or whatever. It came down to really intangible things, and I decided to go with Alix Klineman to take a shot at Tokyo with her.”

There is no way she could have known the player Klineman would one day become: Far and away the most dominant blocker at the Tokyo Olympic Games, the best blocker in the world. And that’s the gritty magic in all of this: April Ross took a risk. She skipped the penny slots and went straight to the high stakes tables, because nothing short of a gold medal would do, and she knew it.

The beauty in this story, in listening to Ross’ words four years ago, isn’t necessarily that it all worked out — the fact that it did certainly helps, of course — but that she took a shot so few are willing to take. She followed her gut, even when her gut was telling her to do a mighty difficult thing.

How many would have settled for the safe partner, winning a few more AVPs, maybe qualifying for the Olympics, but falling short of the dream they knew would be pushing the limits of risk?

In a way, it’s almost the beach volleyball version of The Alchemist, one of Ross’ favorite books, one she quotes frequently on social media: So many of the characters in the book ignored the calling of their personal legend, and after ignoring it too long, it simply becomes unattainable. The Universe stops helping you get there.

Yet to the few brave enough to pursue it, to overcome the many obstacles that inevitably ensue, the Universe begins to conspire in your favor. Things begin to happen, falling inexplicably into place.

“Remember,” the author Paolo Coehlo writes, “that wherever your heart is, there you will find your treasure.”

The personal legend April Ross felt for herself was an Olympic gold medal. She followed her heart, and there, in Tokyo, was her treasure: A gold medal being draped over her neck, by the only partner she knew could get her there.

VBM Staff - September 21, 2021
25
PLEASE JOIN THE TEAM! We are happy to provide these TV and streaming listings for our readers. Help keep free volleyball journalism free by becoming a... 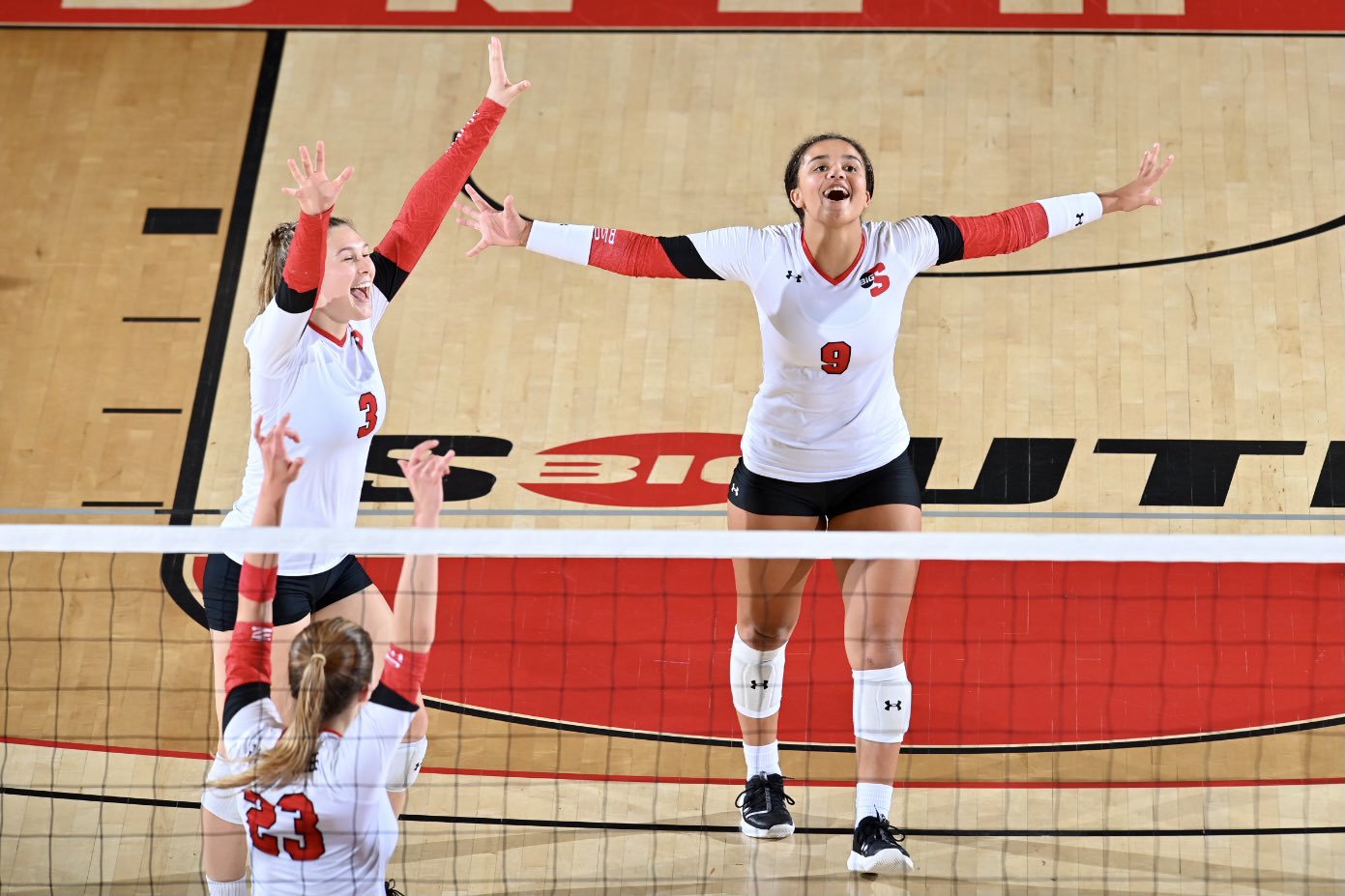 h J R
VolleyballMag.com @VBMagazine @VBMagazine: Here you go, as the @NCAAVolleyball season heads into conference play, recaps, notes, and a league-by-league breakdown. Read this and you'll be all caught up: https://t.co/efn7NJFxq2 https://t.co/bSvvXr61Bl