Editor’s note: Travis Mewhirter last week wrote about being in China. Now he’s in Israel, playing in another FIVB beach tournament, with some to reflect and write more in detail. It’s been an interesting week.

SOMEWHERE OVER THE PACIFIC — There are many things about this moment in my life, sitting on a plane from LAX to Qingdao, China, that I do not know. I do not know, for example, the time. Or day. Or where, exactly, I am in the world, though I do believe I’m somewhere over the Pacific Ocean.

There is one thing, however, that I do know with certainty: There is a dead man sprawled on the floor 10 feet in front of me.

For weeks, upon learning that I’d be competing in the FIVB Qinzhou three-star this past weekend, people had cautioned me about volleyball trips to China.

“Avoid the meat,” was a common refrain, so as to avoid both sickness and testing positive on a drug test, so pumped full of hormones the animals are out here that it is rumored — not confirmed, mind you, just rumored — athletes have failed doping protocols in the past.

“Budget time for transportation troubles,” they unanimously said, often accompanied by a laugh and a distant look, a shake of the head, as their minds rewound to their own travel stories in the Far East.

I now have one of my own.

The first eight or so hours of the trip were normal enough. Splendid, really. My flight, with my partner, Mike Boag, a few rows behind me, was only half full or so. I did the obvious thing and moved to the empty exit row, the one behind the business class curtains, as soon as the doors shut and it was obvious nobody else was coming on the plane. I knocked out before the plane took off.

Hours later, in that foggy phase of awake and asleep, when you’re trying to keep your eyes closed because if you just keep them closed long enough you might just fall back asleep, I heard calls over the PA system that there was an ill passenger on board. If there was any doctors or medics, they could use some help.

I am not a doctor.

I fell back asleep.

Then the calls became more urgent. Begging. If anybody had any type of medical background, they could use them. I opened my eyes. Sleep wasn’t coming anymore. A little more alert now, I heard a light thudding and smacking sound behind the curtains separating business class from economy. I peeked behind the curtains, where the flight attendants were performing CPR on a passenger.

For hours, this went on: Calls for doctors or medics. The thuds of CPR. At some point, they brought out the defibrillators, which is around the time the calls on the plane changed tone: We weren’t going to Qingdao, our original destination, anymore.

We’d be emergency landing in Petropavlosk-Kamcatski, a small island — I think, though Google doesn’t work here, so fact check me, will ya? — off of Russia (Editor: He was right, it’s in Russia, but not an island).

Curious, two brothers from BYU on their way to backpack around Thailand, came over to my seat, peeked behind the curtains.

“Definitely dead,” the older one said.

My first trip to China, my first FIVB, began with a guy dying 10 feet from me.

“Welcome,” Trevor Crabb would tell me many hours later, when we finally landed at the Qingdao airport and I had enough WiFi to receive messages, “to the World Tour.”

China gets a bad rap among beach players. A lot of this is fair. Some of this is not. The majority of complaints about China — or many places not named the United States — I’ve found, are rooted in our own senses of normalcy.

It is normal, for instance, for us to have drinkable tap water. Clean air. Organic food, should we want to splurge, or just regular old veggies, should we be less picky. We have the choice between cage-free chickens or just normal chickens.

Simply put: We have it good. Breathtakingly good.

“One of the beautiful parts of this job,” Kerri Walsh Jennings told me as we watched Ryan Doherty and Miles Evans play Russia on Saturday, “is to be reminded of how grateful we should be.”

One of my favorite aspects of this trip is how grateful — truly, incredibly grateful — the workers here, be it at the hotel, the airport, the restaurants, the tournament, anywhere, were to have us. When Mike and I arrived, finally, at the Nanning Airport, a day and a half after we were supposed to, we were flagged down by a young lady named Cecilia in an FIVB hat. She took a great deal of pride in showing us to the bus station to get our tickets to Qinzhou. When we told her that we’d spend the next hour at McDonalds as we waited for the bus, she told us she’d come find us if we were late.

She did, and then she walked us to the bus, made sure the driver notified us when we arrived at the Wan Guo Hotel, then waved us goodbye.

At the hotel, workers were delighted, practically giddy, to practice English with us. At a restaurant on the last night here, with Kelly Claes, Sarah Sponcil, Jordan Cheng, and Spain’s Angela Lobato and Amaranta Navarro, the owner of the place came out and told us the meal was on him. It was an honor to have us.

Our waitress abandoned her duties at the rest of the restaurant and just sat down and chatted, either in broken English or through the WeChat translator, about life. As we rose to leave, a number of workers requested pictures with us, not because we were athletes or whatever, but just because we were different — gigantic human beings from the West.

Yes, there are, as all of you likely know, more imperfections and flaws than I care to count in China. An oppressive government that is so far behind on basic human rights it would be funny if it weren’t so tragic to the people living here. The standards of living are astonishingly low, though the citizens here likely know no different, seeing as the press isn’t free, and search engines and social media don’t work unless you circumvent it with a VPN.

I do not know enough about the world and its politics to speak knowledgeably enough to write much more on the topic of the Chinese government, but from more than a week in China, I can tell you this: There are good people everywhere.

The cautions I received about competing here were all true enough: The air quality is borderline dangerous, as my weather app notified me every day. The food is suspect. You cannot drink water that doesn’t come in a bottle. Sanitation is an oxymoron.

And yet I’ll fly out tonight — a Sunday for me, I believe, though truth be told I just have no clue anymore — with the lasting impression not of the many drawbacks of this place, but with overwhelming compassion for the workers, all of whom just want to make your life as good as possible while you’re here.

Will I come back? Probably. Not out of love of this country, whose policies I loathe, or for the food, which did make me uneasy, or for the water we cannot drink, or for the air that’s toxic to breathe, but for the volleyball, and the people.

After nine days on planes and shuttles and buses and taxis, that may be the only certainty I’ve had. I still don’t really know the time. The day, as I travel back in time to Israel here in a few hours, will be confusing again.

There are good people everywhere.

Of that, I am certain.

Photos from the first day of volleyball at the Tokyo Olympics

Lee Feinswog - July 23, 2021
2
These are the Sensory-Deprivation Olympics: No fans. No natural crowd noise. No touching. — Dave Sheinin, The Washington Post Ah, the sound of silence ... One of the...

VolleyballMag.com @VBMagazine All the @usavolleyball and @USAVBeach in one recap as part of our daily, comprehensive coverage of the Tokyo @NBCOlympics @Olympics, plus Ed Chan's photos: https://t.co/4jTxpqXwhr 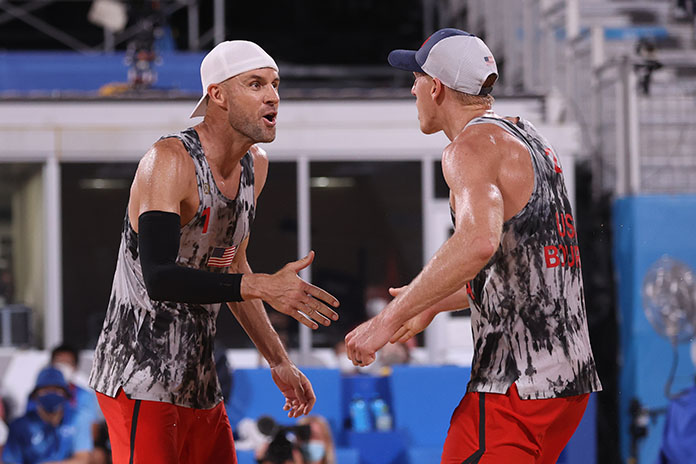